Tunny returned from New Year in Naples. What about ... is back, as usual, full of smiles, hugs, wonderful memories, emotions captured for himself and his guests.
They sailed, exploring the most beautiful islands, chatted under the stars and had lunch at anchor.

The peak of the emotion comes with the New Year, when the sky above them became a colorful and glittering universe, reflected in the sea. The boat seemed to float in a parallel world, the blue of the night has become the backdrop to a fireworks display that probably can not be seen anywhere else in the world. Naples in the distance, with its people, its celebrations, its beauties.

Then there was the cooking course: a hoot. Tunny in a chair with a small group of Catalan students struggling with the preparation of a risotto with strawberries and champagne!
Dinner was delicious and we all now expect a dinner invitation ... in Barcelona! 🙂

Suitcase ready! (If you look closely even sprout tails of prawns for the New Year’s Eve dinner).
She leaves and goes to Naples, where he will depart at a time of Ischia and Procida and as usual will be able to give new emotions to a new crew … the first year, all Catalan. And we look forward to new tales of the sea … the first of 2017!

Happy New Year to you all and good wind Tunny! 😉

Have you ever seen the giant squid? We intend to live, not in documentaries …
Well, neither we! But this summer we found out what he does when it crosses (and perhaps collides) with a sailboat.
Imagine a little ‘: night sailing between Ustica and Naples, waning moon, or rather dropped completely, dark, or rather black at all. Two waves, or rather the sound of two waves, that only in the morning turned out to be for what they were: our bow was completely covered with squid ink, including staple!
And … this time you’ll have to take our word because in the rush to clean up before getting dyed for ever we forgot to take pictures! ☺

This is the story of two Attila: a human and a dog, faithful companions in life, today, after another story, do a couple on the island Lipari.
They live on the beach, in a hut they built (Attila-quadruped loves sticks and gave his good contribution). Some philanthropist donated the solar panels and so came the light, while the bathroom was built by Attila’s studies on ancient Roman.
They have a vegetable garden, where they grow according to the moon and the seasons. Attila comes out every day with his fishing boat and what gives him the sea, he cooks. If its secluded beach land humans (he calls us so) that they go to genius, he host them at his table made of axes polished  from the sea and offers them the best fish in the world. If they are not nice, simply, they do not receive them.
The stories that Attila has to tell are often fascinating and with unique atmosphere. But these, of course, is another story, which we’ll tell you another time.

Yesterday we talked about Attila and Attila. But in fact we have not really told that our Tunny, listening to their stories, has been literally enchanted!
Attila is rare soul, a hermit, an idealist, a dreamer … a bit ‘like her. Will that eye to eye, they understood and recognized! Pictured their first meeting in style “Swept Away destiny” (thanks Tunny to let us  publish it!)

So let this be known: anyone who will make the Aeolian course with Carla on board could not refuse from one of these special meetings where she brings a gift for his house and he always has the most beautiful images to tell her! 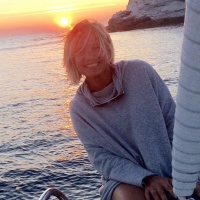 We are curious, we are open, we like to meet new people and invent new things. Horizon was born for this: to write new stories. Better if new sea stories.

In practice: would you like to be part of Horizon Line? You want to turn your passion in your work? From September remains connected with us! We will open our doors and we will expand the horizons. 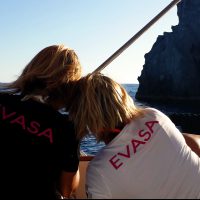 Aboard of “Escaped”, two escaped for a week for a stroll among the Pontine Islands. Unique must of the holiday: to escape from the routine and enjoy the pristine bays of Ponza, Palmarola and Ventotene. And we pleased them!